On June 18th, UU the Vote volunteers partnered with the National Equality Action Team (NEAT) to advocate for people of color and LGBTQ+ folks regarding their under-representation in the 2020 Census.

An atmosphere of celebration shone through the Zoom screens. Days after the Supreme Court delivered its decision protecting LGBTQ+ workers, UU the Vote and the National Equality Action Team (NEAT) held a phone banking action to help people of color and LGBTQ+ people  register in the 2020 Census.

The day began with words from Reverend Michael Crumpler. Rev Crumpler oversees LGBTQ+ programming for the UUA, and works with UU the Vote to link people fighting for LGBTQ+ equity to the movement. “I just want to name that this is a very important week,” Rev Crumpler began. “We’ll take the win when it comes, and we are very excited. It is Pride in June, and it feels all the more stronger and vibrant as we see young people of all races, ethnicities, and gender identities pouring into the street for black lives.”

The volunteers were able to reach targeted callers because of NEAT’s work with the national LGBTQ Task Force campaign. The effort selects the top 30 counties in the country that have the highest level historically of not being counted in the census combined with the highest level of POC and/or LGBTQ+ people; volunteers know their calls will reach the places that matter.

Opening prayers and words testified to the roots of Pride and the fight in solidarity with underrepresented communities. The training began, running through the accessible program that the volunteers would be interacting with. Then, people pressed the dial button.

The approach to the day required patience. “This isn’t going to be like other phone banks — it’s about the marathon, not the sprint,” said Brian Silva, a member of NEAT who led the phone bank. “There is going to be a lot of wrong numbers, a lot of wait time. We ask folks to dig deep — because every call, every call matters.”

By the afternoon UU the Vote volunteers dialed 300 times, and gave Census information to almost 100 people. The calls won’t end there, however. After participating in the training with NEAT, volunteers can call on their own time. Some call folks on their 30 minute lunch break. Others make a weekly commitment to spend an hour every weekend.

“The census is one of the most important things Americans can do, and it is one of the most misunderstood things when it comes to importance,” Silva said. “When we talk about resources or lack of resources in a community, it is because of underrepresentation in the counting.”

“The census is one of the most important things Americans can do, and it is one of the most misunderstood things when it comes to importance,” Silva said. “When we talk about resources or lack of resources in a community, it is because of underrepresentation in the counting.”

Interested in making a change? Next week, UU the Vote is launching the #GA100K challenge. We have a goal of making 100,000 calls to voters in Texas to combat voter suppression and work in solidarity with communities fighting to have their voice heard.

Join in on the challenge to prove what UU’s can accomplish when we put our faith in motion.

Check out the full UU the Vote schedule for GA here. 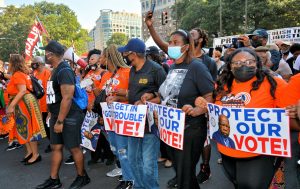