Leader of Vote Forward Traces His Work Back to UU Youth

One of the chief strategists behind Vote Forward credits his upbringing in the UU church to the values that push him to do electoral work.

Letters aren’t going out of style just yet. Vote Forward, a non-partisan organization aiming to increase voter turnout in key battleground states, is making sure of that. The organization is using a simple but well-tested idea: that handwritten letters are special — and that receiving a letter will significantly increase the likelihood that someone on the edge of voting turns out in the upcoming election.

Matt Ewing, one of the people behind the letter-writing effort and senior advisor of Vote Forward, has dedicated his career to affecting political change. He was an early employee of MoveOn.org, an organization that reinvented the wheel by using the internet as a key political tool. As a national field director Ewing built up an “online to offline” organizing model, employing the internet to mobilize volunteers and optimize the impact of in-person communication — something that simply hadn’t been done before.

After a stint in the private sector, Ewing decided to return to the realm of organizing. A week after the 2016 election, he put in his notice and ended up with Swing Left, joining the organization a couple days after it had launched. It swiftly grew into a grassroots movement of hundreds of thousands of people stretching across the country.

Now Ewing has chosen to cast his lot with Vote Forward and amplify their work. One of the most important aspects of the organization, according to Ewing, is its efficiency. “[Writing letters] turns out to be one of the most effective things you can do to increase voter participation per hour,” he told me. It enables volunteers to reach more people than canvassing and provide an impact similar to  phone banking.

“[Writing letters] turns out to be one of the most effective things you can do to increase voter participation per hour.”

Letter writing is not merely a nice gesture. Vote Forward is targeting high-impact states and drawing on rigorous research to back its theory. In a randomized control trial for a U.S. Senate election in Alabama, turnout among letter recipients was almost 4 percentage points higher than the control group — a massive difference by political metrics. In other elections, the effect is not as shocking but is consistently proven to be one of the most worthwhile ways to spend your time increasing voter turnout.

Ewing appreciates how Vote Forward engages not only his skillset but his values. “It brings together the combination of community organizing, digital tools and platforms, and a sense of values that I give the Unitarian [Universalist] Church a lot of credit for help shaping.”

Sequestered in western Massachusetts, Ewing grew up attending UU church. But it was in high school when he felt like he had discovered something special. A self-described shy and under-confident kid, Ewing found a place in his UU youth group that ended up being formative: to his values, his confidence, and of course — his passion for organizing.

“That was a huge part of my life,” Ewing said. “That’s where I got my first anti-racist training, where social justice started going from a concept that seemed good to being surrounded by people who were actively talking about it and engaged in it.” He also had his first leadership position in regional UU youth events, one that would propel him to become focused on organizing in college and eventually make a career out of it. Now Ewing is a coveted name in online political organizing.

“That’s where I got my first anti-racist training, where social justice started going from a concept that seemed good to being surrounded by people who were actively talking about it and engaged in it.”

If Ewing wants one idea to be taken from the mission of Vote Forward, it is that just an hour of writing letters will impact voting trends in crucial states. In a time when many people are motivated and looking for something that will make a mark, Vote Forward gives them the direction that they may be looking for.

“At the end of the day, democratic participation is too hard in this country [although] it should be a delightfully simple activity,” Ewing told me at the end of our call. “I’m aware as I’ve ever been today that voting isn’t enough. But we’re also in an election so important that it is surely a key part of the puzzle.”

Vote Forward is a platform that many UU congregations are already using. And now, the organization is partnering with UU the Vote. Use this link to join UU’s across the country affecting political change to encourage voter turnout this November. 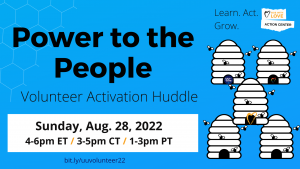 Join us for the Power to the People Volunteer Action Huddle

UU the Vote at General Assembly 2022 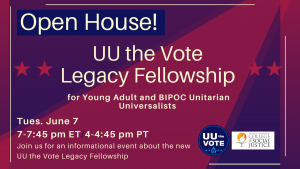