District attorneys wield substantial power, including discretion over general law enforcement priorities, what criminal cases are prosecuted, which cases are dismissed or never pursued, whether bail is requested for defendants, and what punishments the state requests. District attorneys’ responsibilities may also include advising local government officials on legal matters, advocating for the rights of crime victims, and protecting childrens’ welfare.

In various jurisdictions, the office may be called county attorney, solicitor, prosecutor, state’s attorney, prosecuting attorney, or other titles, but we use the most common term of district attorney (DA) within. In many jurisdictions, a DA represents a county or region, as well as the state.

The DA is directed, by law, to protect the rights of the accused. Their selection often impacts civil rights, racial justice, police practices, treatment of immigrants, drug policy, reproductive rights, LGBTQ+ rights, environmental policy, and other vital concerns. In many states, DAs also are empowered to seize a person’s property based merely on suspicion of it being used in committing a crime — a practice known as civil asset forfeiture.

These responsibilities give DAs power to either enable or block the realization of core Unitarian Universalist (UU) values, like justice, equity and compassion in human relations, and honoring the inherent worth of all people. The DA handles key decisions that often perpetuate racial injustice, systemic oppression of the poor, and marginalize LGBTQ+ and people with disabilities but the office also can be crucial to achieving positive reforms.

Despite their importance, DA election races typically generate minimal media attention, and many voters choose whether to cast a vote and for whom based only on party identification and name recognition. This combination of high influence on key justice issues and modest media attention makes DA races an excellent prospect for local congregations and groups to spotlight key issues. Below, we provide sample questions for a candidate survey — a tool you can use to spotlight key issues and ensure they are discussed.

Because of variance among state constitutions, local powers, current issues, and political composition, your survey will be most effective if your group includes some data and examples specific to your community and state.

Candidate surveys (or forums) should be a nonpartisan effort to educate the public on key criminal justice issues and encourage accountability for candidates. Local congregations and all non-profit 501(c)(3) organizations must avoid partisanship and cannot endorse candidates but may educate potential voters on issues and help people see candidates’ positions on matters of interest. Your questionnaire must go to all ballot-qualified candidates running for an office, and the questionnaire should be posted online. Use (almost all) open-ended questions and include a response deadline, word limits and clear instructions.

We suggest you publish their entire response without any changes — even for clarity or grammar. Follow up promptly to confirm receipt of responses and let respondents know when you will publicize the results.

Unless you have an expert within your group, Google Forms is likely the simplest method for disseminating your questionnaire and collecting responses. Here’s a thorough video tutorial on creating questionnaires via Google.

Examples of choices a DA can make

Potential Questions for Your Candidate Questionnaire

How to Deploy Your Candidate Questionnaire

Getting candidates to respond may require multiple contacts and we suggest one person be charged with candidate contact and follow-up. Consider partnering with other organizations to increase the perceived importance of your questionnaire. You can make it compelling by informing the campaigns of your timeline, how their responses will be shared, and the size of your audiences (newsletters, social media…). Share your plans for publicizing the results in the media beyond your organization(s) own websites, social media, or publications.

You may opt to include some additional information on candidates. This could include:

If you decide to move forward with creating a questionnaire, please tell us! We may be able to connect you to others planning action or offer state-specific resources. We are happy to offer feedback on a final draft of your questionnaire before you import it into a form. 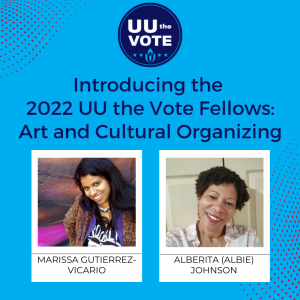 Introducing the 2022 UU the Vote Fellows: Art and Cultural Organizing 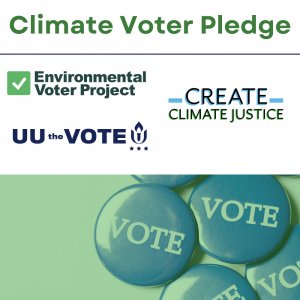 Will you pledge to vote for the climate?