Ballot Strategies: There’s More to an Election than the Candidates

In electoral organizing, it’s common to hear things like “What’s your win number? Your knock rate? Reach or conversion rate?” For those who focus on these campaigns it can be a numbers-driven sprint to the short-term goal of getting a candidate in or out of office.

It’s rare that you find a group that has a ballot focus and vision statement where “we strive to build a world where all people are fully liberated, live with dignity, and thrive so that equity and justice prevail.”

“we strive to build a world where all people are fully liberated, live with dignity, and thrive so that equity and justice prevail.”

The Ballot Initiative Strategy Center (BISC) is exactly that.

While many of us have been extra-motivated about the Presidential race this year, BISC reminds us of what else is at stake and centers ballot initiatives as direct democracy tools for liberation. Ballot measures can be leveraged as part of a larger movement to build multi-racial democracy that centers people of color, queer, low-income, immigrant, and other marginalized communities (& the intersections between them), to move towards racial equity, build and transform power, and galvanize voters to participate in democracy.

Ballot measures can have transformational impact across the entire lifecycle of the work–from when it is an idea to research to how we build coalitions, conduct civic engagement, and implement.

The new strategic framework developed by BISC, in concert with community organizers and progressive funders, contrasts a former culture in movement of just getting the wins, and instead examines and interrogates the definitions of what winning is: who is leading, who is getting funded, investing in our people, and building power.

Similar to the work to dismantle white supremacy culture within our institutions, BISC held a 450+ person conference last month to address what’s on the ballot but also to change the culture of organizing, drawing on front-line organizers who have been doing this all along and as part of the recent upsurge of new movements.

Landscape Overview of Ballot Initiatives in 2020

Ballot initiatives and constitutional amendments are allowed in twenty-four states. They provide a real opportunity for grassroots initiated social change.  Some conservative legislatures are trying to make it harder by enacting stricter ballot initiative rules. In other states, activists are organizing to gain citizen-initiated measures on the ballot.

Most ballot initiatives have until May or June to collect signatures and then they have to be certified (usually by the Secretary of State – another reason that position is so important).  BISC staff were not able, of course, to give a full landscape at the conference, but here are highlights of the more than 1,000 ballot measures (good and bad) that BISC is tracking.

You can check the BISC State by State Map and click on your state to see what’s moving.

Note: BISC is currently assessing how the pandemic is affecting ballot initiative organizing and is in the process of compiling tips and resources.

So many justice issues that we UUs care about will be on the ballot this fall, including:

Florida and South Dakota both have a $15/hour minimum wage initiatives, while Ohio has one for $13/hour.  Arizona, Idaho and Michigan have initiatives for more revenue for education. Nebraska has one on pay day lending reform. A very significant measure on progressive taxation is moving in Illinois. And in California rent control is on the ballot to allow municipalities to decide.

Renewable energy in Missouri and carbon taxes in Oregon and Vermont are on the ballot.  Oregon activists are also seeking to gain toxin regulations. In Nevada there are interests trying to overturn a citizens measure to protect the environment that was passed in 2018.

There is an assault weapons ban moving in Oregon. In Montana there’s an initiative to protect gun rights.

Many states are preparing to restrict abortion rights in preparation for a Supreme Court ruling that would uphhold a Louisiana law that restricts access to abortion and further lays the basis to overturn Roe v. Wade in a future ruling.  So-called ‘heart beat’ amendments and other restrictions are moving in Colorado, Iowa, Kansas, Kentucky, Louisiana, Michigan, Missouri, Oklahoma, and Oregon. Planned Parenthood is helping organize to defeat these measures.

A very dangerous measure is moving in Missouri that would mandate that municipalities collaborate with ICE.  Alabama and Oregon both have proof of citizenship initiatives.

In 2018, Colorado amended their constitution to get rid of the words that banned slavery ‘except for punishment’ – the measure is aimed at banning enforced labor in prisons. Now there are similar measures up in 2020 in Nebraska, Tennessee, and Utah.

Arizona has a sentencing reform measure moving in 2020 and in Oregon activists are seeking to reduce felony drug possession convictions to misdemeanors.

There are measures in thirteen states for decriminalizing or legalizing marijuana or for permitting medical marijuana. These will help end the school to prison pipeline and mass incarceration from the ‘war on drugs’.

The Whole 2020 Election is a Referendum

The 2020 election will be referendum on Trumpism, on nationalism, corporate power, and white supremacy culture. Regardless of who is on the top of the ticket, electoral strategists and organizers can challenge all this via ballot initiatives in their state.

Further, at a time when people have low confidence in government and the candidates for office, overwhelmingly, people are able to name the impact in their lives of ballot initiatives such as regaining voting rights, raising the minimum wage, or winning paid sick leave.

Even as we drill down to concrete issues, it doesn’t mean we can ignore the larger systems at play.  The solidarity white supremacy counts on to prevent progress cuts across class, self-interest, and even race.  It’s repeatedly deployed to defeat initiatives and has to be incorporated to the center of any strategy. In today’s climate, it can even be used to polarize in positive ways, asking people to choose clear sides between freedom or collaboration with racism. Learning and adopting frameworks and approaches around this makes the multi-racial solidarity we need to win more possible, durable, and real when we listen, share stories, and ultimately fight for each other.

What we call “bring your passion to the polls,” others are naming as “Integrated Voter Engagement.”  Ultimately, it can’t be an every two or four year process where temporary infrastructure is stood up and doors are knocked without relationships or lasting commitments.  BISC is modeling a process UUs can learn from of co-creation and accompaniment with frontline groups. And the ballot initiative process – researching, polling, creating messaging, canvassing, collecting signatures, getting on the ballot, monitoring the opposition, getting out the vote – offers an arena for establishing, deepening, and moving relationships over the long-term: Issue conversations, non-electoral organizing, voter registration, plan for voting, and mobilization.

Knowing that those who oppose a more fair world are prepared to knock back any advance we make, it’s not enough to build a campaign and win. I took away from the conference that we have to transform power. Otherwise we get stuck in a ‘whackamole’ situation of winning and getting knocked back. We win when we change who is voting and invest in the organizations that create infrastructure for organizing. 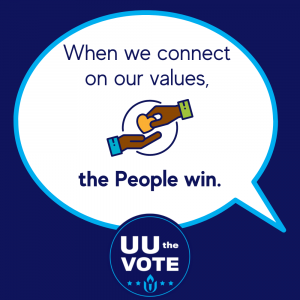 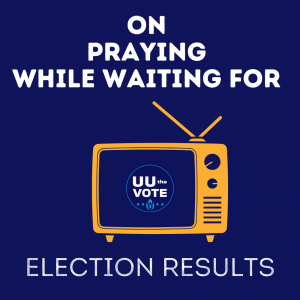 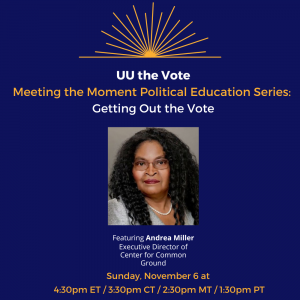